The Global Network for Health in All Policies (GNHiAP) governance model is based on a multi-stakeholder engagement with the aim of ensuring effective coordination and tangible outputs. GNHiAP is managed by the Executive Committee and all committee members work pro bono.

The composition of the ExCom should not exceed six members, covering 6 different institutional sectors.

The Chairperson is a member of the ExCom and is appointed mainly based on his/her commitment to HiAP, and also because of his/her international recognition and good connections to stakeholders. The term of service of the Chairperson is 3 years.

The GNHiAP Secretariat is nominated by the ExCom to support the work of the Network and of the Chairperson.

Each member commits to three years term. Membership is automatically renewed at the end of the term.

When deemed necessary and appropriate, GNHiAP members can request the establishment of a technical working group (TWG) in line with the GNHiAP workplan. The TWG will be endorsed by the Executive Committee and dissolved when the task is completed. 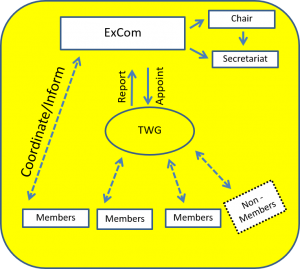