Province of Quebec has a long history in Health Promotion – working on social determinants of health as a part of the public health program and section of the Public health law which requires health impact assessment to be included in other laws and regulations. Government of Province of Quebec’s plan (PAG) to promote healthy lifestyles and prevent weight-related problems was establishes in 2006-2012, which was the first whole-of-government approach for health in the province. Government Policy on prevention in health established in 2016-2026 is more ambitious and more complex. It’s focus is on population health and health equity, addressing several health determinants for which the levers are under the control of non-health sectors.

Key drivers for HiAP have been public health goals and political will (financial pressure on the health care system and demand from the population).

Province of Quebec’s governance for HiAP 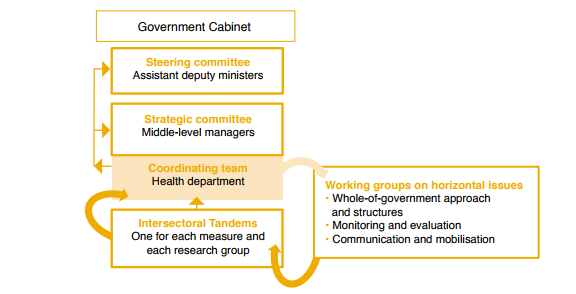